Contains threads on British Army equipment of the past, present and future.
Post Reply
2 posts • Page 1 of 1 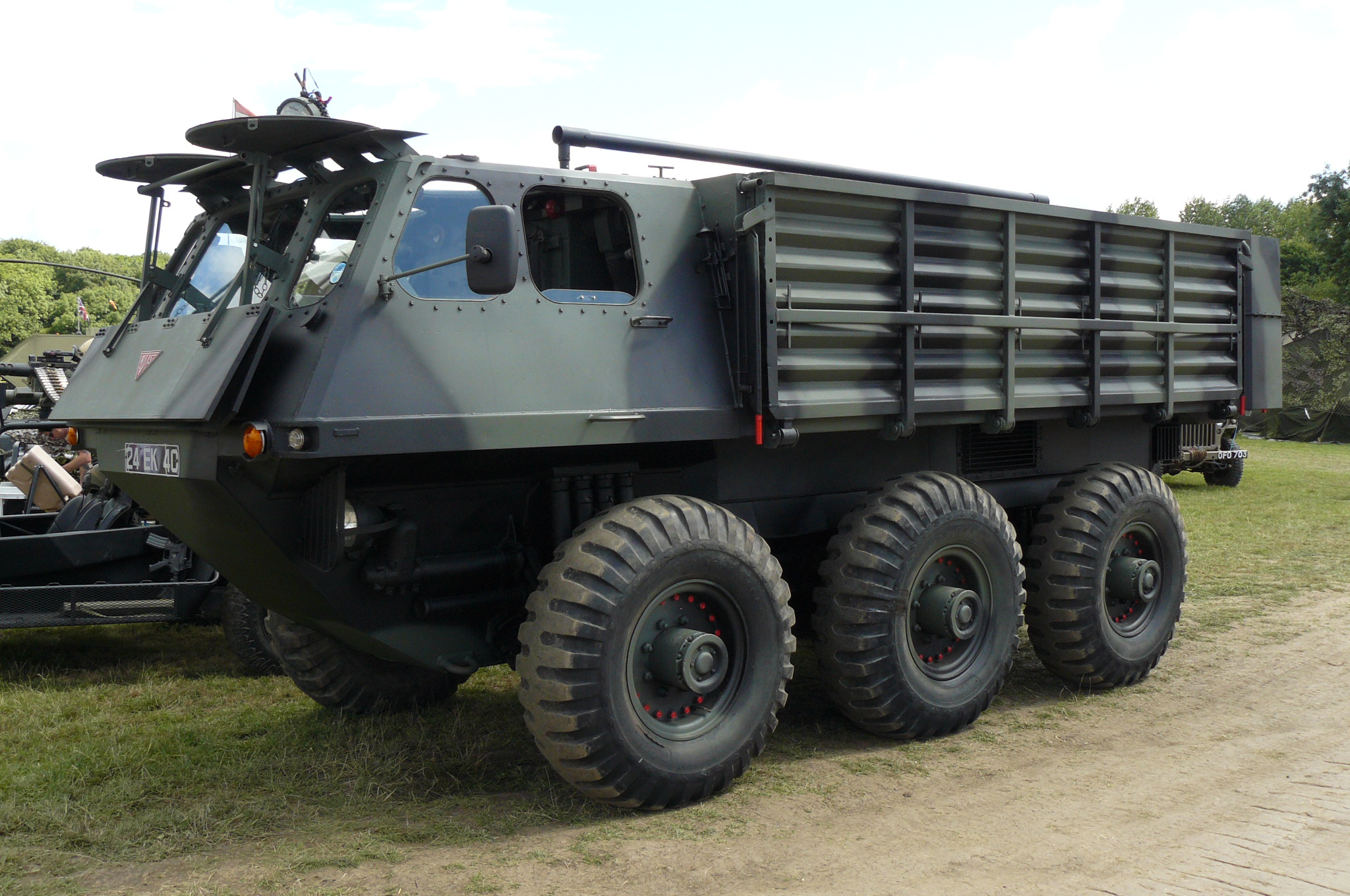 Introduction
The FV 620 Stalwart, informally known by servicemen as the 'Stolly', is a highly mobile amphibious military truck built by Alvis that served with the British Army from 1966 until the 1980s.


History
The Stalwart was a private venture by Alvis that was adopted and entered service with the British Army in 1966 as a general transport truck in preference to the FV431, the load carrier variant of the FV430 series. It was one of the same line of vehicles that included the Alvis Saracen, Saladin and Salamander. The high mobility and amphibious capabilities were considered ideal for resupplying units in the field, particularly those of the British Army of the Rhine (BAOR).


Design
The hull is the vehicle chassis, the engine is situated under the load deck in the rear of the hull and the gearboxes, differentials and transfer boxes forward of this. The load deck was open-topped with large drop down panels on either side. Waterproof seals ensured that these would not leak when in the water. The three man cab has the driver's position in the centre and a seat for a passenger either side. The cab can only be entered through roof hatches.

The Stalwart could carry 5 tonnes of stores, or tow 10 tonnes.

In the water it could be driven at about 6 knots by vectored thrust water-jet propulsion units.

The drive system, which included the all-wheel drive, multiple gearboxes, and the water propulsion units, was complex and needed a lot of maintenance. When the amphibious qualities become unnecessary, it was common for the water jets to be removed to reduce weight and maintenance.

The Stalwart's impressive over-terrain capabilities came from the fact that the 6-wheel-drive system lacked differentials, using simple bevel gears to transmit drive. A centre mounted no-spin differential allowed a certain amount of slip between the two sets of wheels on each side of the vehicle on hard surfaces, but there was no allowance for rotational speed differences between front and rear. The centre no-spin unit allowed the wheels on either side of the vehicle with most grip to drive when off-road. This had the effect of making the vehicle appear to crab (move from side to side) when negotiating muddy conditions, thus making the Stalwart a true 6-wheel-drive vehicle, with 3 wheels locked together and turning at the same speed.

However, this system caused 'wind up' in the transmission (inter-component stress) as all the wheels were forced to rotate at the same speed, which during cornering is impossible. This led to rapid wear and breakage of the bevel gear boxes if the vehicle was used on firm surfaces, such as tarmac or concrete – in off-road conditions, the natural 'slip' of a loose surface, such as mud or gravel reduced 'wind up'. This problem is of special concern for modern-day enthusiast Stalwart owners – to get a vehicle to a show either requires moving it by low-loader or driving it on the road, risking damage to the transmission. Alternatively, the front and rear driveshafts could be removed, eliminating windup at the expense of off-road capability.

During military use, the problem of transmission 'wind up' was solved by laying out railway sleepers in a grid on flat ground and driving over them if on long road moves; this allowed the transmission to 'unwind'. On more than one occasion, servicemen drove Stalwarts into car parks and used the kerbstones separating parking bays for the same purpose.....quite unofficially. Another problem with the transmission was that the vehicle was designed to be driven loaded. Driving the vehicle unloaded caused increased wear on the drivelines to the wheels as a result of the increased angle of mesh of the joints. 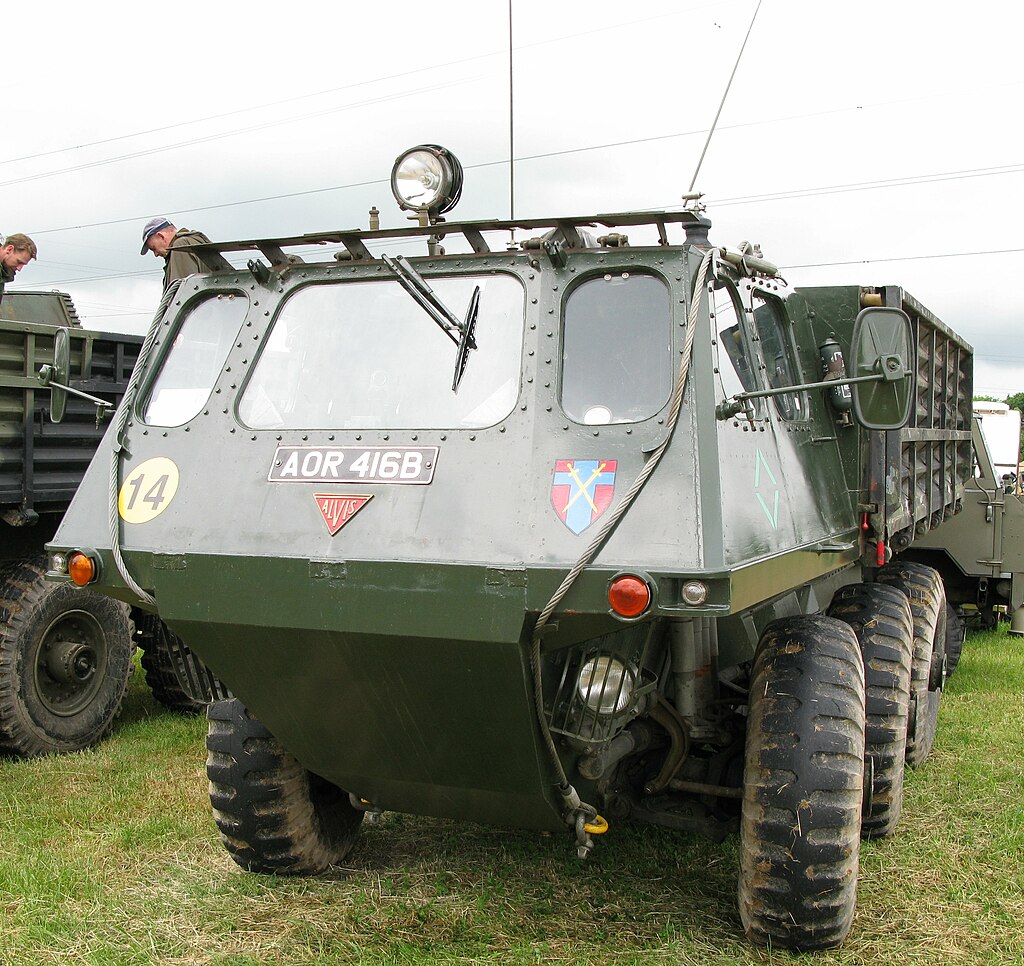 FV622 Stalwart Mk 2 General Service. This had a 2-man crew although a 3rd seat could be fitted to the right of the driver as a field modification. Could also carry 38 fully equipped troops or the Gloster SARO Bulk Refuelling Pack as alternatives to the 5 Ton cargo. The jet drive units in all the Mk 2 variants were much more efficient, giving a claimed 9 knots. The most obvious visible difference is that the lower edges of the cab windows were now angled downwards rather than horizontal. This was to improve visibility at close-range, particularly when being marshalled by a banksman standing nearby.

FV624 Royal Electrical and Mechanical Engineers (REME) fitter's vehicle, based on the Mk 2 Stalwart. Two extra seats were added and a different crane from the FV623 variant.
Top